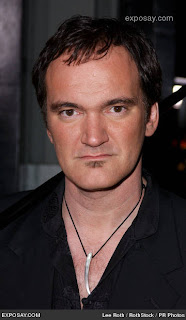 QUENTIN TARANTINO
Well, it looks like "Inglorious Basterds" is off to a good start at the box-office. It's the number one movie in the country and pulled in $37.6 million in tickets. It is Tarantino's best movie opening to date.
So pop the champagne for Quentin Tarantino and The Weinstein Company. I don't think the movie opened big simply because of Brad Pitt (as some media reports say) -- but more because Quentin Tarantino hasn't released a movie he directed since "Death Proof" in 2007.
Tarantino recently sat down with Charlie Rose for an hour interview. It's always fascinating to watch him be interviewed with his wealth of film knowledge and manic manner. I've seen him interviewed a lot lately and he's happiest when he's got the floor and able to rant about his passion -- filmmaking -- but when an interviewer asks a question his face freezes momentarily almost in disappointment for having to listen instead of speak. Have you ever met people like that? Who will talk and talk and talk with you giving them the floor for however long they need, but when you ask something or say something, they look impatiently perturbed? Lol. That's Quentin Tarantino.
But, I enjoy listening to his take on writing, directing, filmmaking and the business overall. I like that he primarily considers himself a writer first. He loves directing but told Charlie he will probably hang up his hat when he turns 60 and "become a man of letters" writing novels. His love for writing is paramount. And I have to say, he is one of the greatest at writing dialogue. I recently reread "Pulp Fiction" (co-written by Roger Avary) and it's gripping from the opening scene in the diner. His dialogue runs very long in all his movies, but it's so compelling, it still moves the story forward.
Tarantino said it took a long time to write "Inglorious Basterds" because he couldn't stop writing. People said he had writer's block, but he said it was just the opposite, "I couldn't shut my brain off" from writing.
I won't see his latest movie in theaters, but will eventually check it out on DVD. It's funny because my 68 year old aunt just saw it and said it was bloody but held her on the edge of her seat for 2 hours and 30 minutes. So, that's a good endorsement for me. But, a Facebook friend saw it and said it was slow and a big yawn. Who to believe? That's movies and stories -- they speak differently to all of us.
One thing is for sure. QT has a distinct voice and style. He hasn't sold out to do the big studio pictures or just script doctoring to make big paychecks. He really takes his time, obsesses over each script and delivers from his heart. What more can we ask? So hat's off to him.
Until next time.
Posted by Janet Lawler at 10:18 AM

I must say , I write because Readers told me I try to imitate Tarantino. I thought that was a compliment.

But I never read his scripts.

But saw his movies with mixed reactions.

I walked out of Inglorious Basterds
after I saw the first 15 minutes.

I hear what you're saying. I haven't seen Inglorious Basterds yet. Will wait for DVD. I've heard mixed things about it -- some folks loving it and others thinking it stunk. I remember when I first saw "Pulp Fiction" I thought it was terrible, but then saw it a second time and third time (and read the script) and then came to like it. I find QT's movies too violent and quirky, but I admire his individuality and voice. He's a rare bird in a business of copy cats.

Thanks for reading the blog!

I wrote a piece on "Inglorious Basterds" on my blog. You might like it. I quite enjoyed the film.

"Basterd not too Terdy" (LOL)