So I flipped through my planner to see what I actually accomplished from January to December of 2010.  (I don't keep a journal anymore, just a daily planner to jot down events, meetings and experiences from the day.)  What do you know?  2010 was a fairly good year.

I blogged a lot more.  Hope you enjoyed it here.

I had my second play Extreme Green produced in Florida and New York City.  Fun times -- worked with some great NY theater folks at Thespian Productions.

I met or got to see in person some of my heroes: Edward Burns, Thelma Schoonmaker, James Taylor, Carole King, and Bono.  Not bad.

I worked out pretty regularly.  Surprising!

There was even an opportunity for travel -- from sunny Florida in winter to the southwest of Arizona in the spring to camping on the beach in the Outer Banks of North Carolina in summer to an autumn drive to the heartland of Indiana.  It was a great year for visiting family, enjoying the company of friends and road trips!

How about you?  Was it a good year?  Did you write that script yet or get closer to your dream of writing it?  I like looking back on my planner to see when I write most, the projects I worked on and the ebb and flow of my process.  There were some dry spells, but overall, I keep plugging away on some story, play or script.  Keep a record yourself -- to see when you're most prolific, and if not, what's getting in your way?

If you need some written inspiration, check out this website to read free screenplays online http://www.screenplays-online.de/

And finally, with this being my final post for '10, I want to thank all of you for following The NY Screenwriting Life for another year.  Five years!  Big thanks to those readers who take a moment to email me with a shout out about the blog.  It's awesome to know you're all out there... and that I'm not writing in a void.

I hope all your dreams come true in '11.  That you have love, good health, success and passion. Who could ask for more?  Maybe a good agent would be nice.

Happy 2011, everyone!!  Toot your horn!  Sip champagne.  Now it's off to the madness of Times Square shortly.  I'll post video or pictures in the New Year!

Until next year...
Posted by Janet Lawler at 3:28 PM No comments: 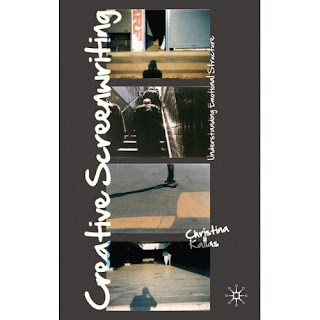 Until next time.
Posted by Janet Lawler at 1:12 PM 2 comments: