What screenwriting books do you recommend?

I get this question a lot from people.  We all know there are entire sections at Barnes & Noble and Borders dedicated to the art, craft and business of screenwriting.  I've read a great deal of these books.  I have many great ones on my home library shelf that are creased, highlighted and worn from numerous readings.

So here are some of the best books on screenwriting that I have read and continue to revisit for tips and inspiration.


I also love and have re-read the following books about writing and filmmaking:

Bird by Bird  by Anne Lamott
On Writing by Stephen King
The War of Art  by Stephen Pressfield
The Spooky Art  by Norman Mailer
The Big Picture by William Goldman
Three Uses of the Knife by David Mamet
Hello, He Lied  by Lynda Obst
You're Only As Good as Your Next One by Mike Medavoy with Josh Young
Making Movies  by Sidney Lumet
Rebel Without a Crew by Robert Rodriguez


I highly recommend that as a screenwriter you dust off your public library card because it's a super place to get your hands on books without spending a fortune.  At my NY Public Library, I can download books and listen to them on my iPod while I'm walking my dog or exercising, so take advantage of this wonderful free resource.  Support your local library and book stores.

Enroll in the University of YouTube!  There are a gazillion free videos about screenwriting, storytelling, screenwriters, and filmmaking on the Internet.  Become a geeky Web student.  You can spend hours watching, taking notes and learning from pros who are putting their advice, tips, and books all over the Internet.  Take advantage of our Information Age and absorb what is out there.  Some of the Web videos are lame: about marketing, self-promotion and making a buck off aspiring writers, but much of it is very good and useful.

iTunes is great.  I download screenwriting podcasts and listen to them while riding the subway (better than hearing the guy next to me snore).  I subscribe to Storywise by Jennifer Grisanti.  Jennifer does some super interviews with major producers and writers in television and movies.  I also like Pilar Alessandra's On the Page.  Pilar covers a wide range about the business and craft of screenwriting with up-and-coming writers and established agents.  Of course, I also never miss Jeff Goldsmith's podcasts with major screenwriters through Creative Screenwriting Magazine.  Jeff is too cool for school.

I hope this helps in preparing you for 2010.  It's important to stay up on everything out there from screenwriting pages on Facebook to Twitter to new movies to new media to books to e-books to seminars.  But make time to write your script or play or book EVERY single day.  Don't spend days, weeks, months and YEARS reading about writing... or researching... we still have to do the hard part -- writing.  Make that your New Year's resolution come January 1, along with getting fit and learning how to play the guitar.

Somebody recently suggested writers buy an egg timer.  Sit down and write for one hour with the timer on.  It will focus you to write and put in the time.  DING -- when the hour is up you can go about your business and eventually you won't need the timer at all -- unless you want to bake a cake. 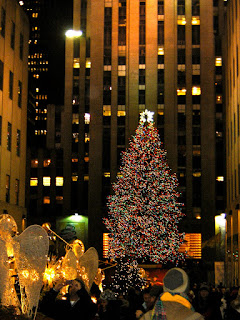 HAPPY HOLIDAYS TO ALL THE WRITERS IN THE WORLD...

Okay, I'm sure it's beautiful almost everywhere for Christmas, but New York City just hums with excitement, lights and tourists this time of year.  The Rockefeller Christmas tree is quite a sight, all bright and tall.  I attended the 30th Annual The City is Singing at St. Patrick's Cathedral which put me in the Christmas spirit.  I just finished wrapping all my gifts and putting them under the tree.  Whew.

2009 was a pretty good year.  I'm looking forward to 2010, a new year, a new decade and setting new goals.  What are yours for this new year?  Will you write that script?  Finish your book?  Contact those agents?  I hope whatever your goals are that you pick a new strategy and follow through with action every single day (and not just in January).  We can do it.  Just focus and follow through.  Mull over new goals before now and January.

But until then, enjoy your holidays and time spent with friends and family.  Unwind, eat special treats and live it up.  It's that time of year.  Hope you get all that you asked for and share your joy & gratitude with others.

Until next time, HAPPY HOLIDAYS from New York.
Posted by Janet Lawler at 1:55 PM 2 comments: 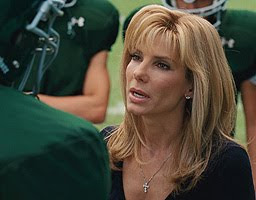 Okay, what did Sandra Bullock step in this year?  She has two hit movies "The Proposal" and "The Blind Side", just received two Golden Globe nominations and is having one of the most successful runs of her long career.  I smell an Oscar nomination.  She's come a long way from "Speed".

It's funny because this year I wrote a play about Sandra Bullock called "NetFits".  It's a comedy about a young married couple who fight over having a joint NetFlix account.  The wife keeps ordering Sandra "Sandy" Bullock movies and bumping her husbands picks farther down the queue.
You can read the play below if you like.  It was produced and performed in New York on Off-Off Broadway on May 6th, 2009.
So hats off to Sandra Bullock and all her success!  She's 45 and riding a wave.  Who says actresses over 40 don't get good work?  Look at Sandra Bullock and Meryl Streep.  Their movies are packing movie theaters.  Keep it up, ladies, we love you.

A play by
Janet Lawler

A young, married couple are in the living room.  The wife tapping on her laptop.  The husband listening to his iPod and texting on his BlackBerry.