I'm looking forward to attending (and volunteering) at the upcoming La Costa Film Festival in Carlsbad, California held from Sept. 10-13, 2015.  Volunteering is a great way to help my local film community and to meet new filmmakers.

Actor John McGinley ("Wall Street" and "Scrubs") will be presented with the Legacy Award at the festival. The four-day LCFF — will be held at the Omni La Costa Resort & Spa (see photos below of this gorgeous resort), Cinepolis Luxury Cinemas-La Costa and the Ruby G. Schulman Auditorium at the Carlsbad Dove Library — and screen more than 45 films. 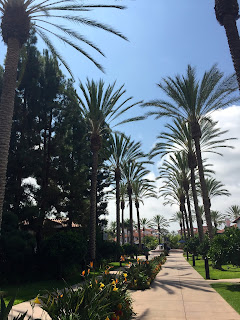 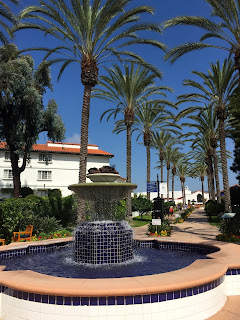 There are red carpet galas, after parties and FREE Q and A panels with filmmakers making a difference in the film industry.  Don't miss these if you're in the Carlsbad area (northern San Diego).

The LCFF is founded by Carlsbad residents Michael and Ruby Callihan in 2013, the festival will open with the dramatic comedy All The Time, starring Lynn Cohen, Sean Modica, Laura Shay and Pritesh Shah and co-written and co-directed by Marina Donahue and Christopher Fetchko.

Hope to see you there.

Posted by Janet Lawler at 7:58 PM No comments:

A Visit to the WGA, West

THE WRITERS GUILD FOUNDATION:
Premier resource for emerging Hollywood writers
by Janet J. Lawler
Want a terrific free resource to help you hone your craft as a screenwriter or TV writer? Free is good  since we usually have to dish out cash for contest fees, script coverage, or to take that weekend course with the latest screenwriting guru.

I came across the Writers Guild Foundation Library and Archive this week while in L.A.  It's a treasure trove of classic material. Visit if you can. It's located at 7000 W. 3rd Street.  Their website is www.wgfoundation.org

You might have thought the WGA, West location was a place to register your latest screenplay, but it's way more than that.  The Writers Guild Foundation, within the WGA, is free and open to the public.  You don't need credits on IMDB or to have won an Oscar to peruse this magnificent space. It's like a shrine for Hollywood writers.

First, you'll enter its sleek lobby devoted to writers of television and film.  Watch videos with renowned writers like Vince Gilligan (his pilot 2005 script for Breaking Bad is encased with the first few pages on display -- note the character UNDERPANTS MAN -- that turned out to be Walter White.)

Other writers featured in the lobby include Callie Khouri (one of my fave writers). Her FIRST (yes, her first!) screenplay Thelma & Louise won the Oscar for Best Original Screenplay.

They also have a section dedicated to the Hollywood Blacklist (no, not the screenwriting website) and one about the Writers Strikes.
I loved reading this letter by studio mogul Jack Warner asking his writers on staff to please be at their desks ready to write at 9am and to put in a full day's work.  That has to make you chuckle. Today, it would probably be "please stop surfing the internet and going on Facebook."
Then, enter into the library/archive space (the Billy Wilder Reading Room) and sign in at the desk. Backpacks aren't allowed, but cell phones and laptops are permitted (there were writers at tables typing away on their latest script) -- the library staff will even supply you with a free locker if needed (just leave your ID). 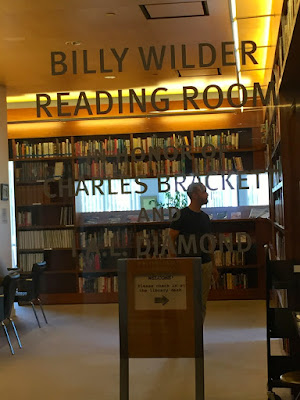 These wonderful archived scripts are separated into Television and Film categories.  Peruse books on everything from TV writing, to comedy writing to writing your first draft.

There is a whole section dedicated to the Mary Tyler Moore Show (and show scripts to read), along with Oscar-winning movie scripts, and just about ANY script you'd want to read -- if you don't see it on the shelves, look in the digital catalog or ask for assistance at the front desk (very friendly staff!)

The WGF gives out collectable glossy postcards to take away, one had Shonda Rhimes's original pitch (written in 2003) for Grey's Anatomy, originally titled "Under the Knife".
The Writers Guild Foundation Library & Archive is a must-stop if you're visiting Los Angeles, or already in L.A.  It's a fun place for pop culture devotees too.

While you're there,  register that new script of yours and pick up the latest WGA signatory agency list.  Keep writing!

Until next time.
Janet

Follow The NY Screenwriting Life blog on Facebook.  Creator Janet Lawler's first novel From the Ground Up is available on Amazon http://www.amazon.com/dp/B00F3CYSU8 and Barnes & Noble http://www.barnesandnoble.com/w/from-the-ground-up-janet-j-lawler/1118054396?ean=9781492346623.


Posted by Janet Lawler at 2:48 PM No comments:

WHEN BAD NEWS IS STILL GOOD NEWS
Not Advancing to the Semifinals of the 2015 Nicholl Fellowship in Screenwriting
by Janet J. Lawler 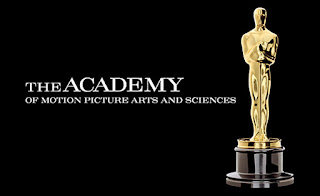 I have to say getting today's news that my script The Tenant didn't advance to the semifinals of the 2015 Nicholl Fellowship in Screenwriting was like a punch in the gut.

As elated as I was weeks ago about making the Nicholl's quarterfinals, today, it's doldrums city. Yeah, screenwriting competitions crush you. You ride that wave of optimism and hope a judge or reader gets your script all the way to the Finals.  You advance in one category, but have no guarantee to the next.

Rejection is what us writers are used to.  We think we're over one mountain, only to find the climb continues.  We can quit or keep pounding the keys.

Fortunately, also today, before I received the Academy's sad email (see below) I was at work on my NEW screenplay. I have outlined some of my index cards for key scenes and acts. They're all laid out on our dining room table.  It's daunting to take on a whole new project -- from scratch -- to come up with new characters, conflict and dialogue, to play the movie in your head AND to hope someday it connects with a reader out there. A reader that has the power to get it made and on the big screen.
And there's always the 2016's Nicholl Fellowship.

THANKS to the awesome Greg Beal (Director of the Nicholl Fellowship in Screenwriting) and to all the amazing judges and readers who made the 2015 competition a thrill ride for me. High-five to you  and to all those who have advanced to the semifinals!  Congratulations!

I look forward to attending the Academy Nicholl Fellowships Awards Ceremony in Beverly Hills on November 4 and meeting my fellow writers.

August 4, 2015
Dear Janet,
Always a difficult time of the year for quarterfinalists (and for us) as, sadly, I have to report that The Tenant did not advance into the Semifinal Round of the 2015 Academy Nicholl Fellowships in Screenwriting competition.
In terms of score, the scripts remaining at the Quarterfinal level fell short of the 149 Semifinal screenplays.  Throughout this industry, at studios, production companies and agencies, such judgments are subjective.  The fact that The Tenant was one of 375 scripts selected from the 7,442 entries may bode well for its future.
For the contact list to be forwarded in the fall to agents, development executives, managers and producers who request it, we’ll use the contact information you have given us.  Check your information below to ensure it is correct. If you elected not to release either your phone number or email, “Withheld by writer.” will be displayed. If you have chosen not to include your logline, “Logline withheld by writer.” will be displayed.
Writer: Janet J. Lawler
Screenplay Title: The Tenant
Genre: Drama, Dark

If you elected to view the comments readers wrote about your script, those will become accessible in your online account by September 1st (simply click tab 7). In October, be on the lookout for an email invitation to the Academy Nicholl Fellowships Awards Ceremony to be held in Beverly Hills on November 4.
In November, we plan to post the lists of Quarterfinalists, Semifinalists, Finalists and Fellows on the Nicholl pages at the Academy’s Web site and on the Nicholl Facebook page.  In January, we'll email you news about the 2016 Academy Nicholl competition, which will include a list of this year's Fellowship winners.
If past experience means anything, several Quarterfinalists will soon become professional screenwriters.
Best of luck in all your future endeavors.
Sincerely,