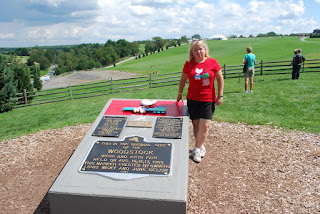 BACK TO REALITY
Vacation is over.
It was terrific but went by in a blink. Vacations are a lot like summer -- we wait and anticipate them, but midway through we know they don't last long and get a little sad. Nothing like long vacations and summers. We can never get enough of either.
It was a great week spent in upstate New York in Ulster and Sullivan counties. We visited Woodstock and Bethel, NY (where the actual concert took place) for the 40th Anniversary of the music festival. It's a beautiful farm where the concert was held originally and now a new Woodstock museum is on the property. It's worth seeing if you want to experience a bit of what the Sixties and Woodstock was all about and its impact on American culture.
The personal stories are fascinating -- talk about good material for a movie. We think of the iconic images of the hippies at Woodstock... but there was so much more going on with local resistance and politics, fear for the safety of the locals and the concert goers, the lack of food, water and medicine, women giving birth, Interstate 87 being shut down from traffic jams, and mass crowds with no means of communicating like today with cell phones and e-mails. Imagine having Twitter at Woodstock. People there in the Sixties communicated by leaving notes on cars, under windshield wipers, and pinned to backpacks or blankets in hopes of being read.
A crazy, chaotic, free, yet somehow organized event that we'll probably never see again in our life times.
Just before going away, I wrote a first draft of my new play called Extreme Green. It's a short play -- 11 pages. I hope to submit it to the short play festivals around the country this fall. It's a two character play and a drama (with some amusing moments) about the local food industry craze.
Until next time.
Posted by Janet Lawler at 7:37 PM