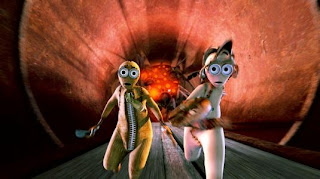 "9"
So last night I went to a screening in Manhattan for the soon-to-be released animation movie "9". It's Focus Features upcoming release http://www.filminfocus.com/focusfeatures/film/9
"9" is first-time feature film director Shane Acker's baby fully mature. Here Acker expands his Student Academy Award-winning 2004 short film by the same title into a full-length movie. The screenplay is by Pamela Pettler (Monster House, co-writer of Corpse Bride). The producers are heavy-hitters Tim Burton (Corpse Bride), Timur Bekmambetov (director of "Wanted" and Jim Lemley (producer of "Wanted").
This animation movie also has a diverse range of celebrity voices added to the mix including Elijah Wood, Jennifer Connelly, John C. Reilly, Martin Landau, Christopher Plummer and others. They don't act it out in a hammy manner like some voice-overs in Hollywood but keep the dramatic, realistic element to their characters.
"9" is an action-packed adventure. It's a animated fantasy epic about what happens when the world's machines turn against mankind and result in mass destruction and a post apocalyptic world. In a last ditch effort to save humanity, the scientist who created the invention known as the Great Machine... also created 9 small creations given the spark of life. Can they save the world and salvage the best of humanity's spirit or turn evil themselves?
Jennifer Connelly plays the ass-kickin' brave warrior #7. Christopher Plummer plays the stubborn group's leader #1 with vigor. (This seasoned actor hasn't intimidated me this much since he blew that darn whistle for his kids in "The Sound of Music".) The characters in "9" are compelling, but I didn't become too emotionally attached to them like with other animation characters like in "Finding Nemo" or "Kung Fu Panda". But the mechanical number characters were interesting enough, especially surrounded by such incredible visuals, sound and action. The ending was a little "Ghost"-like in some ways but cool.
Tim Burton said of Shane Acker's original "9" short film that it "was among the most extraordinary 11 minutes of film I've ever seen. So that explains why the young director got a much bigger budget, bigger names and more toys to play with this time. He puts it to good use.
"9" opens on 09/09/09. That date should be easy to remember.
Until next time.
Posted by Janet Lawler at 10:16 AM