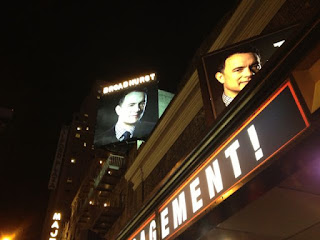 Posted by Janet Lawler at 11:02 AM No comments:

Valerie Harper was one of my favorite actresses on TV.  For some reason, she reminded me of my big sister.  My sister, Catherine Mary, who preferred Kathy, had Rhoda's sense of humor and fashion style... like wearing a bandana in a new way I'd never seen before  in the 70s.

My sister and Rhoda (Valerie) were my  heroes... two beautiful, strong women, one in real life and one on TV, both that I tried to copy in dress (oops... the bandana thing really didn't quite work for me in high school.  I looked like the cleaning lady.) but I did  "tawk" like Rhoda (since I already had the Bronx accent).  And I liked to make people laugh, just like Rhoda.

Who didn't love Rhoda Morgenstern and her TV family?  Her younger, wisecracking-sidekick sister Brenda, her domineering mother (Mrs. Morgenstern played by the wonderful Nancy Walker), and Joe... Rhoda's dream boat guy that she married in NYC.  Gosh, I wanted to grow up to be Rhoda... I even liked her doorman, Carlton.... who always sounded drunk on her apartment intercom.

So, one day, there it was in my mailbox... the official-looking letter from CBS Studios in California.  From MTM Productions... Mary Tyler Moore's production company produced The Mary Tyler Moore Show and later Rhoda.  Her company was called MTM.  Whoa.  Could it be?

My heart skipped a beat. 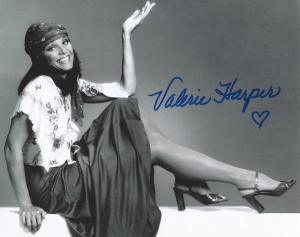 Inside, was an autographed photo from Valerie Harper...  It wasn't a fake (I was good at recognizing fakes).  I treasured that 8x10 photo... there it was...Valerie Harper wearing a head scraf... looking so chic, so cool... I put that photo on my wall with all the other Hollywood photos I collected.  She sent me a couple more photos over the next few years.

I was only a teenager.. but Rhoda made me laugh.  She got me through some tough days.  She made me forget for awhile that my father had died when I was 14.  TV was my escape.  Is it any wonder I still love writing?  Still love movies and TV shows?  It's art at its best... it comes right into our homes and heals when we need it most.

The jokes that Rhoda volleyed back and forth with Mary Tyler Moore on Saturday nights on CBS helped me forget my loss... it made me forget that my big sister was battling drug addiction... and that she might not overcome it.

Today I watched the news about Valerie Harper having terminal cancer.  They said she has only months to live.  That news hurt.  I hope the doctors are wrong.  I hope this is a terrible blunder on the medical community... and that Valerie Harper lives on for many years to come.  She has a great outlook... and miracles do happen.

As someone said on the news tonight, we all love Valerie Harper because we are all Rhoda.  She was one of the first women on TV to discuss her weight, bad dates,  nagging mothers, insecurities about her hair and career.  She fretted (and joked) about never finding love.  She valued her best friend Mary more than anything.  She was as real as TV would allow.

Thank you, Rhoda,  from every girl that you made laugh and forget about their own insecurities... you showed America that a plump girl from New York City could find love and do anything she wanted in the world.  Maybe Rhoda didn't toss her hat in the air with the same confidence as Mary Richards... but Rhoda did make it.

And today, fast forward -- I live in New York City.  I'm married.  I work at a television news station in Manhattan (much like Mary Tyler Moore did at WJM).  I write plays (mostly comedies) and screenplays.

Life sure is funny.

Thanks, Valerie, for sending me that photo so many years ago.  It was a life raft in many ways.  I still keep it.  I'll  keep it, and you,  in my heart always.

Posted by Janet Lawler at 9:45 PM No comments: