So in keeping with the holiday spirit, I want to give away FREE copies of the book "The War of Art" by Steven Pressfield.  I read this short book over the summer and found it very inspiring in overcoming resistance to my own writing (which we all must overcome in all aspects of our lives).

Resistance is when we talk yourself out of writing, or any project (that daily exercise routine, eating better, starting that business, or whatever our goals are today).  We know we have to do our project in order to keep our sanity but yet we procrastinate.  And if we do this long enough, we give up.  We quit.  And then we feel horrible.  We'll then blame a lack of time, or our partner, or our job for us not being able to get anything done!  If only... if only... we'll point the finger at everyone and everything to take the blame off ourselves.  But only we have the power within to get our writing done every day, every week and every year.

We can NEVER give up.  No matter how hard it is or how many rejections we collect, we have to keep going.  We have to put the hours in, the sweat and then enjoy the fruits.

So... back to the contest.  Tell me the way you personally overcame resistance in your writing.  Tell me something that will truly help other writers.  Write your brief kick-in-the-pants regimen here in the comments section and you might just win a FREE book for Christmas.  I'll announce the winners before the New Year.

Thanks and let's keep working and don't let the holidays knock us off our game.

Until next time,
Janet
Posted by Janet Lawler at 10:05 AM No comments:

This is such a wonderful day in our country.

I'm spending Thanksgiving in New York City.  The sun is shining.  It's unseasonable warm.  The Macy's Thanksgiving parade was incredible as always.  It's a great way to start the day as we chop veggies for the stuffing.  I took out a little time to exercise so I can enjoy this feast of food without too much guilt.  And the NY Giants are playing on TV tonight.  So this is a great holiday!

Right now the bird is in the oven and we're getting close to sitting down for Thanksgiving dinner.

We all have so much to be thankful for -- and I'm very thankful for this blog and all you bloggers out there who come and visit with me throughout the year.  You guys are great and keep me going.

It's been a terrific writing year so far and I give thanks for it and all of you.

Enjoy your holiday with your loved ones.  Special thanks to our American troops and allies this Thanksgiving too.

Janet
Posted by Janet Lawler at 2:26 PM No comments: 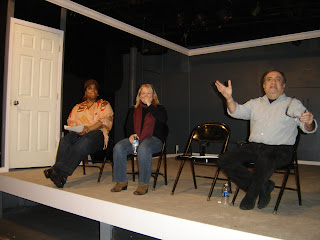 MY PLAY IN CHICAGO

Extreme Green had a staged reading last weekend by the Chicago Dramatists Theatre in Chicago.

It was an amazing experience and a great process for me to be involved with as a writer.  Six plays were chosen from about one hundred submissions.  Director Mike Menendian, the artistic director of The Raven Theatre, judged all the plays and made the final performance selections.  Mine was one of the six.

The day of the play's presentation I was assigned two Equity actors and Mike directed the  play.  The read-through went well and the rehearsals were fun.  Words on the page play so differently on stage and when coming out of an actor's mouth.  The writing is crucial but so is the acting.  It's interesting to see how actors break down a scene and how a director blocks out your character's action on stage.

What I love about playwriting is how quickly you get to see your work produced and performed.  I wrote Extreme Green this summer.  It was performed before an audience three months later.  The feedback is immediate and helpful (and in your face).  When you sit (and squirm) in that audience as the playwright, you know what works and what doesn't by the vibe of the audience.  They laugh in spots you don't expect and miss moments you thought were gems, but land flat.

The audience was kind, supportive and gave their opinions about each play to the playwrights.  Some advice was positive and some negative.  As a writer, it's important to listen (not defend everything) but be open to how an audience reacts to what you wrote.  Sometimes they want more details, or less information, or more of something else.  Sometimes they're confused.  Sometimes they love it.  Sometimes they don't love everything about it.

Overall, going to Chicago was a tremendous experience for me.  Chicago Dramatists are one terrific group.  The hit play "A Steady Rain" starring Hugh Jackman and Daniel Craig had a run there (without the big stars, of course).  Now it's on Broadway and making millions.

So, time to do another rewrite on Extreme Green in case it gets another performance somewhere else down the road.  That's what's so inspiring about get your writing into a workshop.  If you write scripts or plays, ask some local actors or friends to come over and read your work aloud.

It will amaze you with what you'll hear and what you may not hear.
Posted by Janet Lawler at 3:02 PM No comments: