Ah.  Springtime. It's here after a long winter wait.

Everyone raves about autumn in New York... but spring in New York has its own beauty.  What's more uplifting than seeing that first Cherry Blossom tree in full bloom in Central Park?  Or yellow daffodils?  Or tulips on Park Avenue?

Spring is off to a great start.

I attended the TV show Live with Kelly & Michael at WABC last week.  Kelly Ripa and Michael Strahan have a wonderful, energetic, brother-sister chemistry going on and it shines through (explaining the high ratings for their show).
Michael met with a group of fellas who wore his NY Giants jerseys... he brought them out of the audience to sign their shirts (right on their backs!) and take photos.  Cool guy.  Very, very talented man.  A natural on TV.
Kelly Ripa is super friendly, bubbly, energetic (she's a twig and has run to the top of the Empire State Building, no wonder) and she interacts one on one with the audience.  Fun time.  If you're in NYC, get tickets to see the show... it's a blast.
Another great event right now in New York is Holland Taylor in the one-woman show ANN.  Taylor wrote and stars in this solo show that pays tribute to the life of one-time Texas Governor Ann Richards.   It's a terrific performance from a talented actress mostly known for being on TV, playing Charlie Sheen's mother on Two and Half Men and a slew of other parts.  If you like politics, straight-shooting humor, than don't miss this one.
Being in the theater district, swing by the Drama Book Shop on 250 W. 40th Street.  It's a New York treasure for actors and writers and theater-lovers. They carry the latest and greatest in plays, magazines and books focusing on the performing arts.  I can spend hours reading in there. http://www.dramabookshop.com/

One other springtime hit is Bette Midler in her new one-woman show I'll Eat You Last: A Chat with Sue Mengers.  It's written by John Logan ("Red" and "Skyfall").  Bette Midler plays Sue Mengers, the 70s Hollywood super agent, who represented everyone from Barbra Streisand to Faye Dunaway to you-name-it.  Better Midler's delivery of this chat is priceless and not to be missed. 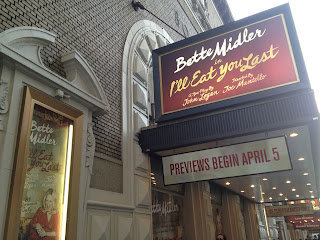 When the curtain went up, and Bette Midler sat there on stage with a slight grin, the audience erupted to the rafters.  Midler last appeared on Broadway over 30 years ago.  She's come a long way since those days... in her music and movies... and the audience loved every minute of her name-dropping, F-bomb blasting monologue.  If you grew up paying attention to Hollywood in the 60s, 70s and early 80s -- this tribute to Sue Mengers is hilarious.  If not, you may get lost with all the movie references, name-dropping and inside jokes... but still, seeing Bette Midler is a win-win.  Get tickets while you can.  It's a short run.

And by the way, everyone knows Midler is a true environmentalist, helping to keep New York City green with her gardens and endless financial support, but did you know she gets driven around in a hybrid compact car right after the show?  No big gas-guzzling SUV waiting for this superstar at the stage door.  She's the real deal.

My one act play NETFITS had a 3-night performance at the LIC One Act Play Festival in Long Island City in March.  The audience voted and NETFITS is moving to the April semi-finals.  Fingers crossed we make it to the finals in late April.   http://www.secrettheatre.com/licfest_info.html

And my screenplay HARK & HAROLD, with co-writer Chris Keller, is now making its way to agents and producers in LA and NY.  It's a Christmas comedy movie script.  This script keeps us in the Christmas spirit even in spring.

Happy springtime, All!  Soak up the sun, play in the grass and smell some flowers.  Enjoy it while it lasts.  Much love to you from New York City.