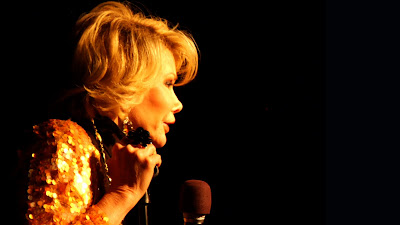 JOAN RIVERS - A PIECE OF WORK
Review by Janet Lawler

This is an amazing documentary.  It takes an unflinching look at the legendary comedian Joan Rivers and her forty year career.  Love her or hate her -- and this film probably won't change your opinion -- but it will give you an insiders peek at what makes Joan Rivers tick.

She's been ticking a long time in show biz -- since the 1960s when she performed in dive clubs in New York and eventually hit it big once Johnny Carson put her on The Tonight Show and said "she'd be a star".  Life changed overnight and she's never looked back... except at press clippings and reviews... but she keeps moving forward, no matter how many critics say she's done.  She has two words for those critics and it's not "just wait".

Ironically,  Rivers wanted to be a a serious stage actress in her youth, not a stand-up comic.  She created her comedy routine as a way to make pocket change and still be free for theater auditions during the day.  As luck would have it, her acting career sputtered... but her comedy routine launched her into fame and fortune, and sometimes, misfortune.

This documentary by filmmakers Ricki Stern and Annie Sundberg (THE DEVIL CAME ON HORSEBACK) is a character study in ambition, insecurity, success, grief and survival -- Rivers is 77 years old and works around the clock.  She rarely turns down a gig.  Nothing is too big or to small for her to attempt.  She'll perform comedy on stage up in the Bronx at 4pm if that's what it takes to keep working.  She considers every open door "a new opportunity".  This might explain why though she has been knocked down on numerous occasions and counted out (canceled TV shows, her husband committed suicide, NBC blacklisted her from late night), she keeps reinventing herself better than Madonna and making a very decent living doing it.  She designs jewelry, writes plays, writes books, wins reality shows, keeps going... no matter what.  And hey, NBC, she returned to your network and won The Celebrity Apprentice.  Payback is a bitch.  That win put her back on top.

This film shows the results of our youth obsessed culture... on Rivers' face.  Comics call her the Queen of Plastic Surgery (she goes on camera here with no makeup -- daring, yes -- and sad -- to see what she's had to do to be accepted in print, TV, film where aging is a no-no).  Is this what an actress or a comedian is forced to do to stay relevant in America? Ask Kathy Griffin.  Rivers' comedy, like it or not, is still timely and edgy -- but it's hard to watch her keep jumping through hoops to please the public or herself.  She would have it no other way -- but  will she ever feel good enough?  Or successful enough?  Her daughter, Melissa, says there is a lot of insecurity there.

The movie focuses on the star and business woman, but it gives a glimpse into her personal life too.  Her longtime manager keeps disappearing and so she eventually fires him, which crushes her.  She worries about her daughter following in her footsteps into show business.  It's a harsh industry, especially for women.  One of the tender moments comes when Rivers takes joy in simply holding her grandson's hand in the back of her limo... and delivering a meal to a former photographer who has AIDS on Thanksgiving Day.  Rivers also invites people, who are alone in her building, to come for Thanksgiving dinner in her apartment.

She is sharp tongued one second (don't dare call her an icon or say she helped open doors for women or she'll let you have it -- she's STILL opening doors) and vulnerable the next (when she cries about losing her manager/friend and other colleagues over the years).

Keeping with full disclosure here, I wrote jokes for Joan Rivers back in the 80s.  It didn't pay much, but it was thrilling to hear her say a few of my jokes.  I met her once and she was so kind.  Today, she says she plans to outlive and outperform George Burns (who lived into his 90s) and other comic legends because she will never RETIRE.  She will never quit.

I think joan rivers new doc is going to be a sensation. I saw a trailer for it on youtube and it seems like JR is letting her guard down, and telling her story –the good and the bad. Anyone as excited as me to check it out?

I recently saw the film and it was absolutely wonderful. You are right, love her or hate her...the documovie won't necessarily change your opinion but offers a rare, surprising, and heartfelt look inside her life and what makes her tick...and not. And yes, agreed...I believe her, too,...she will never quit. Ever. Never. Ever-never. If there's anything that can outsmart extinction, it very well may be Joan Rivers...

I was impressed with Ms. Rivers tenacity and fighter spirit. Her work seems to be her reason for living -- as it is for many people with their identity wrapped up in it -- and she seems to surround herself with her daughter, grandson and friends. But she's never been one to stay down on the canvas after being knocked down, and for that alone, I admire her.