BUT, DO YOU REALLY BELIEVE YOU'RE A WRITER?
Photo: David Lee 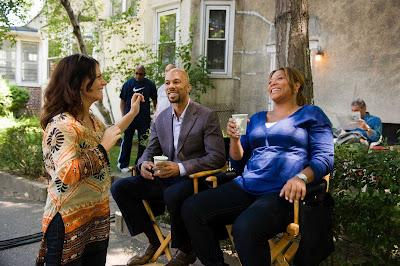 My goodness.  A screenwriter can go broke keeping up with all the new books, seminars, Expos, movies, shooting scripts and how-to deals coming at us every day.

If you're like me, you want to be up on the latest in the business, but who can afford it?  Besides, don't you find that many writers sometimes rely on all these things... instead of just parking our butts in the chair and writing the script?  It's like doing research to avoid doing the actual writing.

As the Nike ads say,  the best way to still learn and achieve anything is by just doing it.  Theory and advice are helpful, but sooner or later, we have to deliver the script.  Writers write -- plain and simple.

Having spent tons of dough over the years on screenwriting books (my personal library keeps growing), screenwriting software (Final Draft is like Apple -- it comes out with a new version all the time), it gets expensive to keep up.

Next weekend, however, I'm happily dishing out my $ for a Live "webinar" with screenwriter Michael Elliot.  Elliot has a movie out right now in theaters starring Queen Latifah called JUST WRIGHT.  Here is the trailer http://www.youtube.com/watch?v=NThQ3SfctsE&feature=channel  It's a Cinderella story about a young woman who is always stepped over for the prettier girl until one day she catches the eye of an NBA star.  Elliot has done interviews lately discussing how he came from a down-and-out background and achieved success despite it.  He was homeless, abused and broke then, but he had one important thing going for him -- he BELIEVED in himself.  He believed he could be a writer and he did it.  Isn't that what holds most of us back from doing anything?  A Lack of Faith in Ourselves?  Self-doubt?  Procrastination?  I love this guy because he learned to be his own biggest champion despite the odds.

Elliot is giving a session online next weekend (JUNE 27th) to help writers.  He got his scripts read by not going in the front door, but finding innovative ways to contact producers and assistants.  He did whatever it took to get his work read.  His seminar is affordable too -- only $20 bucks -- whoa, thanks, Michael, for keeping the cost down for writers who can't afford to blow hundreds of dollars on seminars, online or otherwise.   I spend more than $20 going to the movies now in NYC, so this is $20 well-spent.  Even if I get one or two new tips, it's worth it.  And Elliot is currently working in Hollywood as a writer.  He's in the game.

If you want to learn more about Michael Elliot, or sign up for his webinar, here is the link:
http://conversationwithmichaelelliot.eventbrite.com/  You can also read about Elliot in a recent edition of WRITTEN BY (the official WGA magazine) at http://www.mydigitalpublication.com/publication/?i=36445&p=27  This article is a must-read!  Very inspiring.  Elliot's also on Facebook.  He gives his time through a group he founded called The Ladder which reaches out to help aspiring writers.  Check it out.  Also, http://www.writerslittleblackbook.com/story.php

Today's the first day of summer.  Make it a fun and productive Summer of 2010!