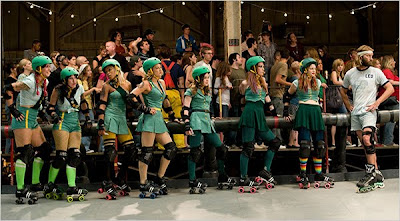 I really like Drew Barrymore.  Who doesn't?  She just seems like a sweet person.  I was blown away by her recent HBO performance in "Grey Gardens" co-starring the fabulous Jessica Lange.  Drew Barrymore did a fine job with a tough role -- bringing sympathy and compassion to a very eccentric character -- Little Edie.  It earned her an Emmy nomination.

Now Drew is ready to open her first feature film as a director.  She's been brilliantly successful as a producer in Hollywood with the "Charlie's Angels" franchise and other big hits.  She went through her troubled teen days and came out on top and continues to grow as an actress and filmmaker.  (Are you listening Lindsey Lohan?  It's never too late to get your act together until it's... well, too late.)  Drew's set to make her directorial debut with the female ensemble cast of "WHIP IT".  This is a Fox Searchlight film.  It's about a young woman (Ellen Page of "Juno") who joins her local roller-derby.  It's a definite girl-power movie.  Drew packed the theaters with women for "Charlie's Angels" and intends to do it again here.

I hope it does well.  We need more movies about young women willing to take their lumps to move forward with their lives.  Drew knows something about that.  She's a survivor and a fighter.  She's also only 34 and talented.   She's a Barrymore.

"WHIP IT" opens on October 2nd.  Get your popcorn ready and dust off your knee pads.   It's roller-derby time.
Posted by Janet Lawler at 5:24 PM