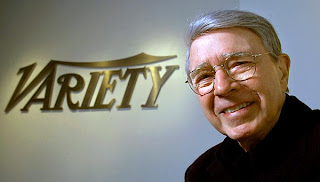 
Army Archerd died this past week at age 87.


He was one of the original bloggers, you might say, giving us the latest news about Hollywood deals, casting and things he felt we needed to know, for better or worse.  He was the columnist that broke the news to America and the world that Rock Hudson was dying from AIDS.  Those who knew Army Archerd said his intent was never to be malicious, but to speak the truth when it needed to be told -- he also stood up against the blacklisting of the 1950s.  He served in the United States Navy during WWII.


I grew up watching Army Archerd interview stars on the red carpet for the Oscars.  This was long before Joan Rivers and the more snarky personalities came along to do it.  He seemed to know everybody in Hollywood and they knew him.  There was a mutual respect for each other and the movie business.


Just recently I discovered that Army Archerd was born in the Bronx, right here in NYC.  Hey, that's where I was born.  But, Mr. Archerd touched my life in a more profound way that was much more unexpected...


Back in 1999, my original screenplay "Brutal Pattern" was optioned by a Hollywood production company and Mr. Archerd wrote the following about it in his column: 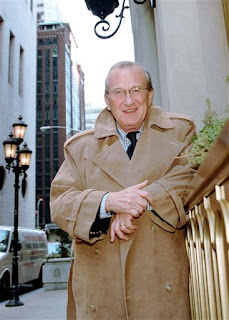 We also lost another great writer in Hollywood -- Larry Gelbart.  He wrote gems for the screen, theatre and television.  He wrote the TV series "M*A*S*H" and "Tootsie" among other well-known projects.  I grew up watching those doctors "Hawkeye" Pierce, Trapper John and B.J. Hunnicut on CBS.  Their wisecracking dialogue sung through my TV set back in the Seventies.  I didn't always get the jokes at the time, but I knew what I was hearing belonged to a unique voice -- that voice originated with Larry Gelbart, on the blank page.  Unfortunately, I never had the honor to meet Mr. Gelbart, but B.J. Hunnicut went on to someday option my script (actor Mike Farrell).
What is it they say about those Six Degrees of Separation?
Both of these men, Army Archerd and Larry Gelbart were giants in Hollywood.  They touched all of our lives, in one way or another.
Until next time.
Posted by Janet Lawler at 10:15 AM