A SHORT LESSON FROM HEMINGWAY

We always hear to show don't tell in our screenplays and writing.  Show, don't tell.  How do we do that exactly?  One way to avoid this is not to tell us the emotion your character is feeling.  Don't write "He looked nervous when he told her he was leaving her."  Instead, write "His mouth became dry.  He fidgeted under the table,  looking everywhere but in her eyes."  This shows us how the character is acting instead of just telling us. 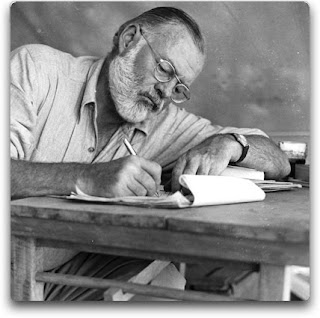 Hemingway advised to write to the point.  To take out all the unnecessary adverbs and adjectives.  He once told a story in six words.  FOR SALE:  BABY SHOES, NEVER WORN.  Imagine that image in a movie and what it would show us... if the shoes were up for sale at a Flea Market or at a Yard Sale at a woman's house.

Elmore Leonard says don't spend too much time describing your characters either -- like what they're wearing down to their underwear, or what they're driving including make, model, and serial number, or every morsel of what they're eating.  You can mention some but more should be visualized by the reader.  They should be able to know what the character looks like from the dialogue, his tone of voice, from the words they choose, or a simple gesture, like "She removed her white hat."

We can use these tips in all forms of our writing... from plays, to scripts to novels to Twitter.  Keep it simple.  Keep it visual.  Keep it active.  Keep the reader's eyes moving on the page.

Enjoy your weekend!
Posted by Janet Lawler at 9:58 AM