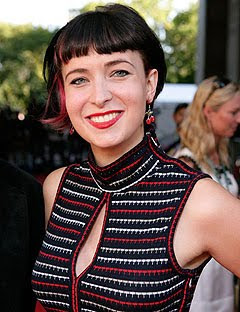 It's a half hour cable program where one celebrated director, writer or producer sits down with three grad students and answers their questions about the business and art of filmmaking.  It's not the most spontaneous show in all the world, but the guests are generally interesting and offer mentoring advice to students.

This week's guest was Diablo Cody.  She is the Oscar-winning screenwriter for the movie "Juno".  She also has written the soon-to-be released movie "Jennifer's Body" (a horror movie with a vintage wink).

Diablo Cody is well-known as a writer, but said she feels more comfortable being off camera and that winning the Oscar was basically terrifying and an out of body experience.  She says an Oscar winner should have a body of great work and she feels undeserving of having won one ("I'm this buffoon").  She doesn't keep the Oscar around because it just seems weird to have one.  She's very self-deprecating and cavalier about the business because she says she never tried to get into "the business" like a gazillion writers.  She stumbled into it by writing her blog "The Pussy Ranch" when a Hollywood producer read it and called her up.  Diablo Cody (her real name is Brook Busey) says that her super fast launch in Hollywood just doesn't happen to most writers and she doesn't know why it happened to her, but it did.

But Diablo Cody was doing something important all along before being discovered and eventually writing her Oscar-winning script.  She was WRITING.  She loves to write and can't believe she's now getting paid to do it, but the point is, she did it even when she was down on her luck.  She believed in her voice and what she had to say, whether someone was going to read it or not.  The whole blog thing and Internet craze was fairly new when she first delved into it as a way to express herself.

She found an audience any way she could and now she writes movies.  Not bad.

I also liked that Diablo suggested for women writers to band together and help each other along.  She has an informal group of women screenwriters in Hollywood that she  pals out with and they give each other pep talks, notes, a shoulder to cry on and professional tips.  Find your niche and unite!

Until next time.
Posted by Janet Lawler at 11:53 AM

Hey Janet! So thrilled I found your blog after a long dry spell. I actually had your wise and wonderful blog saved in my favorites, but lost it all in a crash many many months ago. Anyway, it's fabulous to have you back, buddy! As always, love, love, love reading your insights on the writing life and all things that fall, crash, and stumble into it.

Thanks for this post about Diablo Cody. I read her Juno screenplay and really liked her unique voice. This is good inspiration to just keep writing.

Glad I found your blog because I'm really interested in screenwriting as well as novel writing.

BAFA and Regina, thanks for your comments! I'm so glad you're both here. I hope it gives you a little boost when needed to tackle your goals.