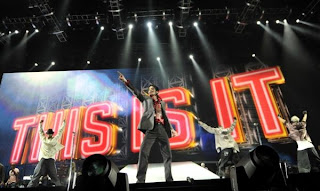 Last night I saw "This is It" in New York City.  The audience turnout for the movie was sluggish.  I expected to have to stand in line to get a ticket or fight for a seat, but the theater was less than half filled.  The ticket taker said it was because of the World Series (with the Yankees keeping New Yorkers close to their TVs), or because the weather is still warm or because it's Halloween.  No matter what the reason he looked disappointed.  So did I.

Maybe moviegoers think it's too soon to see Michael Jackson up on the big screen rehearsing hours before his death.  Maybe we need a break from all the media coverage and hype.  Maybe we're expecting to see the worst projected up there on the screen.

It's just the opposite.

This behind-the-scenes documentary is fascinating and not what I expected to see.  I imagined the movie to be overly produced, overly edited, commercial and morbid.

It was none of that.

"This is It" shows MJ (as his collaborators called him) as the artist, not the celebrity.  We get to see the man behind the curtain and get a glimpse of his creative process, which is amazing to watch.  Jackson is decisive in details (and not just to hear himself speak.  His suggestions are on the money.) He pays close attention to everything from background video in the arena, to the lighting, to every note of music.  This isn't some drug-crazed icon who shows up to rehearsal for a sound check and leaves everything else to his promoters to figure out.  MJ is hands-on and knows everyone's job better than they do.  So don't be fooled.  He expects the best for his audience.

What I loved most is that this movie allows us to see Michael Jackson perform in full shot and without many edits.  The producers and editors didn't try to cover anything up or cut away just to distract us.  Michael Jackson commands that rehearsal stage and the screen.  He sings and moves with such grace that it's startling.  How can this be the same guy who had to be put under every night to sleep?  Here, MJ is lucid, doesn't miss a step, doesn't seem winded or tired.  He communicates directly and politely with his crew and is aware of everything around him.

We've all seen stars on drugs who can't function when performing... Britney Spears, Whitney Houston and Elvis.  They tremble, sweat, seem out of sync with their bodies and brain and talent.  Remember how Elvis looked just before he died on his concert film?  He looked like a man taking his last breathes.

Not Michael Jackson.  He seems in control.  He doesn't sweat and we see him dance without a cut away.  He never stops for water or to towel dry.  I got the impression that while most of us were jeering and sneering about him the last ten years, he was practicing and preparing for this comeback.

We see footage of the young dancers just watching him rehearse in absolute awe as he adds new moves to "Billie Jean".  They give him their full attention not because he demands it -- like a prima donna would -- but because his talent can't be ignored. It's as if he's showing these kids that, yeah, I may be 50, but this ain't gonna be your father's "Billie Jean".

One of the Jackson brothers said a while ago that Michael had studied Gene Kelly movies and lifted Kelly's idea of wearing white socks with black shoes because it brought attention to his feet.  Michael went further and added the sparkles.  We never took our eyes off those feet again.

But it wasn't only the glove, or the sparkles, or the white socks that captivated us.  It was what was inside those shoes.  His magical gift to dance like no other.  In this movie, we see how he becomes one with the music as if it's directly plugged in to him like an amp and flowing through his body.

"This is It" is not a morbid movie, or a freak show, or two hours of just watching a reason not to do drugs -- it's a glimpse at being Michael Jackson at a time when not too many people were supposed to be watching him (the rehearsal footage was shot for his personal library).

Let's face it.  We've all wanted to dance like Michael Jackson at some time in our lives, but fortunately without ever having to be in his shoes.

THANK YOU, Janet for a truly awesome, throughtful, and moving review of a movie I'm eager, but haven't yet found the time, to see. I like you am intrigued by MJ - the man and his talent - not the train wreck more often thrown at us by the media. As much as the tragedies and oddities of his life dominated the headlines, it was his phenomenal talent that held so many of us mesmerized. To see him dance is to be hypnotized, enthralled...captured. If I wasn't sure about making a point of venturing out to see "This Is It," I'm convinced after reading your moving tribute (honestly, it gave me chills!!!) that I ABSOLUELY must.