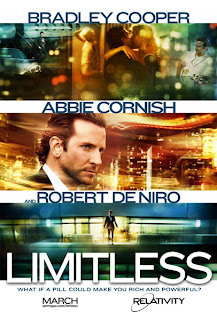 Does the name Leslie Dixon ring a bell with you? It will if you love movies. Leslie's written the popular movies Hairspray, Freaky Friday, Pay It Forward, The Thomas Crown Affair, Mrs. Doubtfire, Overboard, Outrageous Fortune and now Limitless, still out in theaters.

Limitless opened at #1 at the box office when released in March.

The film has a cool premise. A down-on-his-luck writer can't finish his novel, his girlfriend dumps him and his life is spiraling out of control until he takes a new untested drug. This pill allows him to use 100% of his brain power... they say we only use 20% of our brains (and we all know people who use a lot less, don't we?). So what would you do if you could use all your intellect? Learn several languages? Finish that epic script? Play an instrument or two? Or would your use your new found gray matter for power and greed?

Writer Leslie Dixon answers questions for the NY Screenwriting Life.
NY Times film critic A.O. Scott recently said as a screenwriter you're an example of "disciplined productivity" because of your body of work. Do you write every day or are you a binge writer?
"Disciplined productivity" is a total diss, don't you think? Sound like code for "hack" to me. I am writing nothing at the moment. Totally burned out. This movie took a lot out of me and I feel, at the moment, like a shriveled-up husk. (I have, in the past, approached the task with equal parts inspiration and iron will.)

On Limitless you were producer, had consulting rights and director/casting approval -- was adding these responsibilities a blessing or a curse? Would you recommend other writers doing it?

It was good for the end product, but it makes a lot of people hate you. I'm glad I stuck to my guns, but it's bruising.

What's a table reading like with Robert De Niro saying your lines?

Duh.
Double Duh. What book would you give to a friend starting out in screenwriting?
A screenwriting book? I'd say, better to stick to my standard rule: does the reader want to turn the page to the next page? It's a toughie.

Who is the first person you let read your scripts?

Don't remember who the virgin reader was. I was shoving my work under everyone's nose.

How has the screenwriting movie business changed since your early days in Hollywood?
Huge question. Seismic shift after shift -- from corporations owning studios, to the DVD revolution, which kept older moviegoers home (but brought huge profits), to direct download as a method of delivery, the revenues from which still haven't rolled in the way they should. Literacy was already on the way out when I started, so that much is the same! (One of the reasons I wrote "Limitless" was that it gave me an excuse to write a literate lead.)

Would you write for TV if asked?
I love cable shows more than anything, and if I could start my career over, that's where I'd go. That said, I might not have the brutal monomania to be a showrunner.

Do you prefer watching movies at home, in a theater with an audience or online?

I love being with the audience in a real theater. I don't think you can write for the screen if you don't know how a film affects its viewers -- where they laugh, groan with disgust, etc.

Today when you sit down to write you pretty much know that script will become a movie one day. How did you find motivation and discipline to write before selling your work?
I don't for a second presume that what I write will get made. I have a great batting average, but I still strike out. I've written my heart out and been fired. I've done uninspired work and had it instantly greenlit. I had a good feeling about this one, but you never know. (The only way you, a neophyte, can get through a script is to please yourself. You have to love it, or no one else will.)
If channel surfing on a Sunday afternoon, what one movie will you watch again (and again) if it's on?
The usual suspects. Godfather I or II. Dr. Strangelove. Oddly, Mr. & Mrs. Smith has wormed its way onto that list. It's so damn well directed.

What's next on your plate?
Nothing. I may take a year off, I make take forever. I mean it -- I'm fried. Maybe too much "disciplined productivity?" I've been approached to write a novel, and I'm seriously considering it. I'm such an audience whore, it'd probably get shitty reviews and sell.

Thanks, Leslie. We hope you don't really take forever to tackle your next script. Enjoy some rest and relaxation. Or just pop a pill... ;)

Watch the trailer for Limitless here: