Burns recently chatted at the Apple Store as part of its Meet the Filmmaker series.  Packed house.  Seats filled with students, indie filmmakers and admirers.  Several aspiring artists stood up to tell Burns that his first indie movie The Brothers McMullen changed their lives, their college majors, their belief in themselves to make movies.
The talk quickly turned geeky (after all, it's the Apple Store).  Burns' shared his tips to newcomers entering the biz: he shot Newlyweds on a Canon 5D (basically a camera that sells for around $2600).  No extra lights.  No makeup or hair crew.  No wardrobe.  His editor cut the film on Burns' desktop with Final Cut.  Bare bones movie making here.  It took twelve days to shoot over four months.  No permits (maybe a couple, he laughed).  "We didn't worry about permits and cops.  My father is a retired NYPD cop anyway.  I would tell them 'Go talk to Sgt. Burns.'

Scenes were shot on the streets or in public places -- a downtown cafe, restaurant, etc.  Sound recorded on a flash drive.  Burns showed a clip of the movie -- and it looked like a movie!
Burns is a filmmaker plugged into social media.  Big time.  He ran contests on Twitter asking followers to submit original music or ideas for his next movie poster.  They did.
One lucky artist  won the movie poster contest.  He'll be attending the Newlyweds cast and crew party with Burns at Tribeca this weekend.  Who says Twitter is a waste of time?  Here's Ed's website link http://www.edwardburns.net/

He gives away all trade secrets.  Does he worry about competition?  Some young, hot shot director moving in on his indie turf?  Nah. This Long Island guy would like nothing better than to see fresh movies being made by upstarts.  That's how he made it back in the day.  He hasn't forgotten what it's like to be an outsider looking in.

Ed Burns made it big  -- acting, directing, writing -- he works with Hollywood's top actors and directors, but he isn't clawing to make blockbusters or stay in the box-office rat race.  Not even tempted. 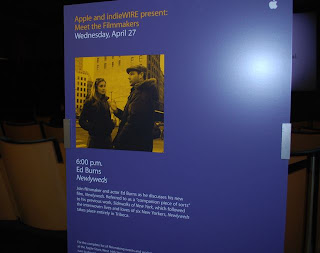 He likes living in NYC with his family and banging out a movie a year for about $25,000.  No big theatrical releases to sweat over.  Those days are gone.  In this digital age, Burns' movies do well online, finding his niche audience through Netflix, VOD, Comcast and Time Warner... and, of course, iTunes. He tapped into that new market a few years back with his indie Purple Violets.  It was released exclusively on iTunes at the time.

"People said then are you out of your mother-effin' mind?  Nobody will watch a movie on their phone.  That was back in '07," Burns recalled.  "I want to keep making small movies every year.  Stay in the biz.  Making my stories."

Burns recalled how years ago, before hitting it big with McMullen, he was walking down the street in New York City and spotted Spike Lee walking right in front of him.  He was a huge fan of Spike Lee, but couldn't muster up enough nerve to stop the director and ask him advice about filmmaking.  Burns says he choked.  "I didn't have the balls to tap Lee on the shoulder that day," he says, explaining why he's quick now to lend an ear to newcomers seeking their way in the biz.
http://www.edwardburns.net/videos/

Giving a special Shout-Out Thanks to Hot Damn Short Sales for their donation this week here.  We appreciate you supporting The NY Screenwriting Life blog.  We'll keep the posts coming thanks to supporters like you!!

Also looking for a new band to download?  Check out The Wilderness of Manitoba.  They're a Canadian Chamber Folk group that will blow your mind.  Love their music.  Give 'em a listen.  http://www.myspace.com/thewildernessofmanitoba
Until next time!