DRINKS AT THE FORMOSA CAFE, ANYONE?
by Janet J. Lawler
July 23, 2019
Los Angeles, CA
The newly remodeled and recently reopened Formosa Cafe is legendary in West Hollywood.  And for good reason.

In its heyday, the place served drinks to the best of old Hollywood -- Elvis, Frank Sinatra, Humphrey Bogart, and John "The Duke" Wayne.

When you bellied up to this bar, you always knew who was sitting next to you.  Movie stars. Famous singers.  They came here to hide out from the movie studio execs down the block.

Just stepping into The Formosa Cafe you feel the presence of movie history (celeb photos line the walls), the allure of fame (and its demons) tempt you as you listen to bartenders mixing and shaking drinks.  I had the popular Mai Tai that could knock your socks off... except people don't wear socks in L.A.

The 1933 Group did a great job in bringing The Formosa back to life.  They poured $2.5 million dollars into its renovation.  Thankfully they did, it's keeping the haunt going that first opened in the 1930s.

The bars (there are two) are huge, one in the front room and one in the back.  There are gorgeous, red booths where you can enjoy Asian eats.  David Kuo oversees the Chinese-American menu.  We enjoyed the pot stickers and the beef and broccoli. 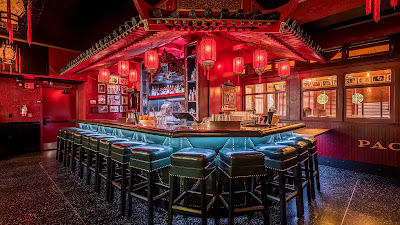 You can sit in the dining room, bar area, or in the remodeled Pacific Trolley car.  It's an authentic trolley car now lined with celeb photos and newspaper clippings about the movie industry from days gone by.  Bogart and Bacall often came here.

During the recent July L.A. earthquakes, a waiter said customers eating inside the trolley got a little impromptu ride.  Fortunately, no damage or injuries, but it sure gave patrons a reason to order another drink.

I love The Formosa Cafe.  It's not a tourist trap but instead is a cool, hideaway vibe.  If you want to wow someone, meet them here for drinks and appetizers.

It's said that actor John Wayne once got so plastered at The Formosa that he passed out overnight in one of the red booths.  They found him in the morning cooking eggs in the kitchen with a hangover.  And, crooner Frank Sinatra is remembered as having a broken heart.  He'd down drinks at The Formosa while pining over Ava Garner. 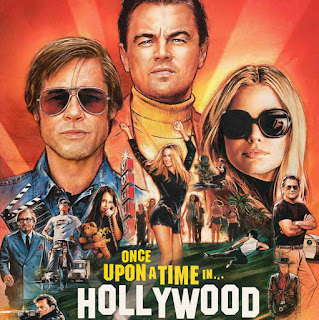 Speaking of, last night was the premiere of Once Upon a Time in Hollywood.  Quentin Tarantino's ninth stand-alone film.  I hope to see it this week.