IN HER WORDS:  Oscar-nominated Screenwriters Kristin Wigg and Annie Mumolo (Bridesmaid) talk about co-writing  Bridesmaids together.

Bridesmaids was a breakout hit at the box office eight years ago... and still holds up with some of the funniest moments ever on screen (it also helped launch Melissa McCarthy's movie career).  It's a great movie featuring a strong cast of women. The food poisoning scene alone is worth watching this movie again. 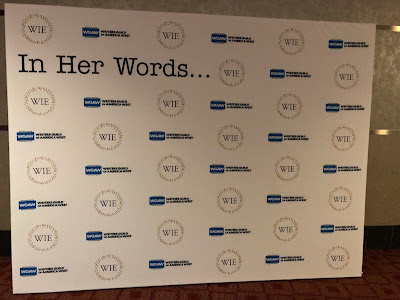 Last night, Women in Entertainment and Writers Guild of America West co-presented their series In Her Words: Spotlight on Women Writers in Film & TV featuring Kristin Wigg and Annie Mumolo, the co-writers of Bridesmaids.

You'll recall Wigg starred in Bridesmaids and Mumolo made a cameo appearance as the terrified airline passenger sitting beside her in the movie.

Both actresses, producers and comedians discussed their writing process -- which included Wigg flying out to L.A. every weekend to work on the collaboration, while still working on Saturday Night Live in the mid-2000s. Wigg would stay at Mumolo's Burbank, CA apartment weekends where they would work on the film's outline, early drafts and improv scenes.

They wrote a pile of drafts before arriving at the one that eventually became the film.  It was their first screenplay.  One of their biggest writing disappointments was when a big chunk of the Bridesmaids script got scrapped -- it originally had an elaborate Las Vegas sequence that producer Judd Apatow cut after several other hit comedies used Vegas as their backdrop (namely, the Hangover).  Although Wigg said they were crushed to have to delete and reinvent something to replace the Vegas sequence, they brainstormed and came up with the "airplane sequence", where Wigg in an attempt to deal with her fear of flying, consumes pills and drinks scotch to disastrous (and hilarious) results -- ending with her and the other bridesmaids being taken off the plane by authorities.

Wigg and Mumolo noted they were surprised at their Oscar-nominated and box-office success since it was their first screenplay.  They knew each other prior only from sketch and improv work in L.A.

Wigg and Mumolo are currently at work on a new project together due out this summer called “Barb and Star Go to Vista Del Mar.”  Good news for us!

The In Her Words series celebrates female writers who have created inspiring work while also breaking through industry barriers.   #InHerWords