The SHAPE AT&T Tech and Entertainment Expo at Warner Bros. Studios made one thing clear -- Hollywood and Silicon Valley plan to make Virtual Reality a bigger part of your entertainment future.  The two-day event (July 14-15) in Burbank showcased top movie talent and virtual innovations.
According to the experts, plan on soon using VR to watch your movies and sporting events.  Toss aside those 3D glasses and strap on state-of-the-art VR goggles.  VR technology is getting more advanced with HD and 360 immersive viewing all designed to enhance an audience's experience both at home and in theaters.   You won't just be watching a movie or sports event -- you'll be in it -- feeling a part of it.  It's pretty mind blowing and a little disorienting.
Oscar-winning director Kathryn Bigelow ("The Hurt Locker") spoke about her passion project The Protectors: Walk in the Ranger’s Shoes, a virtual reality short film she directed.  Watching her short film, we put on the VR goggles.  Some of the goggles worked fine, but there is a learning curve on operating them (like not touching the sides or you'll stop the movie) and beware of poking the person sitting next to you as you move your head up down and side to side entering this virtual world.

Bigelow's film "The Protectors" focused on African elephants’ as they near extinction from ivory-seeking poachers.  The overall movie experience was definitely more exciting wearing the VR goggles feeling like we were walking through the African jungle.  Collectively, our hearts were beating faster.
As if Bigelow wasn't enough to please the audience, Shape AT&T Expo next brought out "Wonder Woman" director Patty Jenkins.  She was an audience favorite giving advice to emerging filmmakers.

Jenkins discussed her career (having worked as a camera person for years before directing) and presented the AT&T Entertainment Short Film Finalists and its winner Nicholas Arioli. 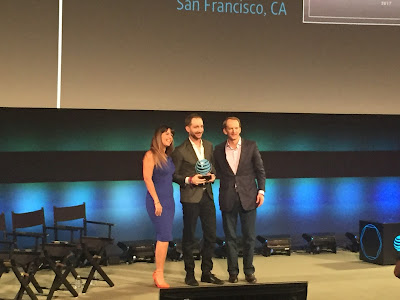 On day two of the Expo, Entrepreneur/Author/Oscar-Nominee Kate Hudson spoke about being a celebrity in today's social media age.  She said she does her own posts on social media and won't allow someone else do it for her.  She likes being authentic with the content she puts out (often of her singing on Instagram!).  Hudson noted the downside in today's fast-paced digital environment is that stars don't have the luxury of having their careers groomed like in traditional Hollywood (naming her mom Goldie Hawn as an example), but rather celebrities today and content are quickly disposable.  There is a constant desire to be relevant or appear to be.  And, that causes headaches for talent agents who have to handle crisis management when stars get into trouble with their posts or videos.   Hudson agreed that it's an exciting time in technology, being able to have more fan engagement, multiple platforms for creativity and global distribution.

The Expo capped things off by offering Warner Bros. Studio tours.  I was like a kid in a candy shop!  Warner's has such a rich movie history with everyone from James Cagney, to Bette Davis to Clint Eastwood and now Ben Affleck having called the studio home.  We toured the set of "The Fosters"... and checked out the iconic "Friends" set... and the DC Super Hero section where "Wonder Woman" is on display right along with Batman and Superman.
Kudos to a job well-done, SHAPE AT&T Expo, and to all the outstanding speakers, participants and volunteers!  It was an inspiring and innovative weekend.