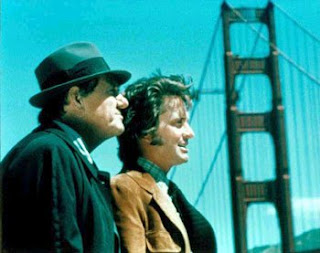 Most people fell in love with Michael Douglas when he played Gordon Gekko in Wall Street. I've had a crush on Douglas since his TV days on The Streets of San Francisco.  Back then, he was young and cool as the rookie California detective. His character spoke few lines each week, but Douglas held his own even up against his heavy-hitter co-star Karl Malden.

Fast forward 35 years.  On Monday night, Michael Douglas received the 2010 Chaplin Award at a star-studded bash for his contributions to the film industry.  His wife, Catherine Zeta-Jones, accompanied him to the event, as did his dad, legendary actor Kirk Douglas, also on hand was Jimmy Buffet, Erika Christensen (a sweet person!) Danny DeVito, Tobey Maguire, Bette Midler, Ashley Olsen, Justin Bartha, Brooke Shields and many others. 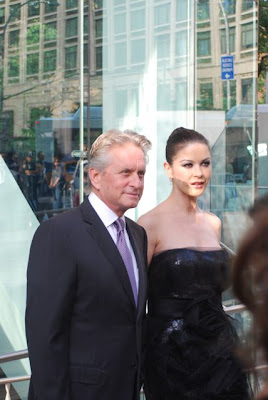 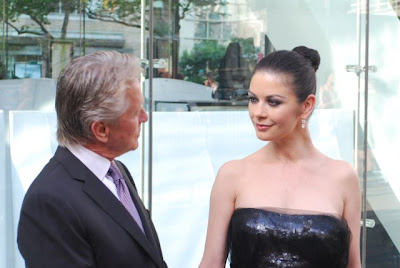 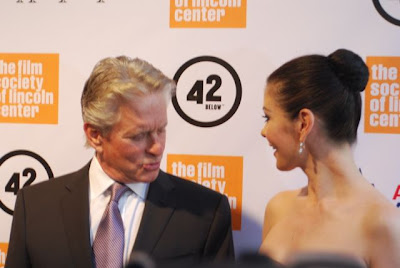 Michael Douglas has starred in some of my favorites films and no doubt yours -- just take a look at some of his work:

Douglas also produced One Flew Over the Cuckoos Nest in 1975.  He won an Oscar for doing so.  Cuckoos Nest won five Oscars that year, including Best Picture and Best Screenplay (based on the book).

Not long ago, he returned to TV for a guest appearance on Will & Grace.  Remember his sexy dance with Will?  Let's just say, Will got a taste of what it was like to be Sharon Stone and Glenn Close.  http://www.youtube.com/watch?v=1kAllg1w92I

I still have a crush on Michael Douglas, only more so these days.  His new movie The Solitary Man is getting great reviews and we still have Wall Street: Money Never Sleeps to look forward to in the fall.

Hope you like all the pictures from the event.  It was an exciting night in New York. 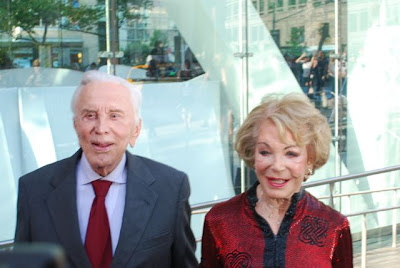 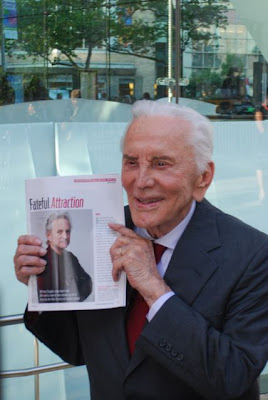 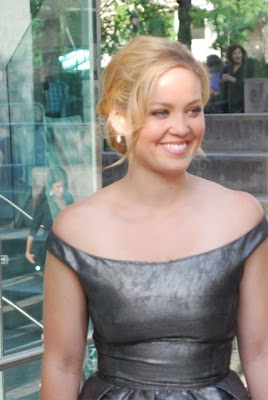 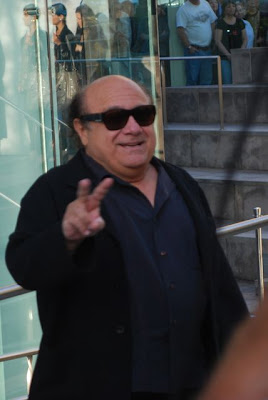 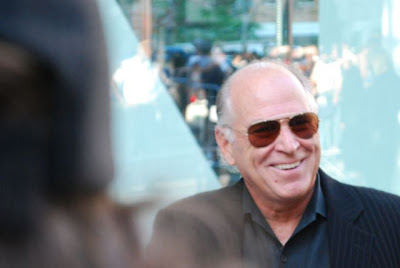 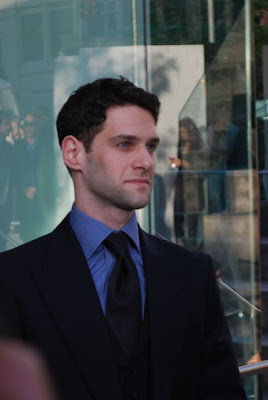 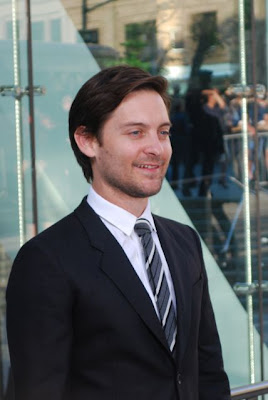 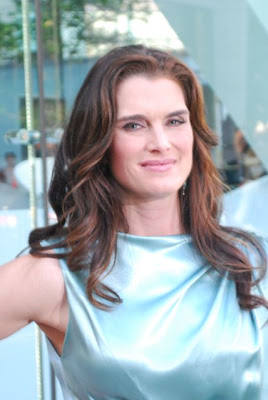 Until Next time.
Posted by Janet Lawler at 7:56 AM No comments:

EDITING... ON FILM AND ON THE PAGE

So you write that great script.  You sell it to Hollywood.  They shoot it with big-named stars and then it lands in the hands of a film editor.  With a delicate splice here, and a snip here, that film editor can technically rewrite your entire script.  It's the final step in the creative process of a movie and one of the most important.

Editing is a crucial, yet the often overlooked craft and art in movies.  It's not a very glamorous job (a lot like screenwriting)... editors, like writers, get little credit... little recognition for their work... but are often the bookends to making a spectacular movie.  It's the talents of both the screenwriter, and the film editor, that make words meet images and create movie magic.


Do you pay attention to film editors when you see a new movie?  Who edited great movies like  The Graduate?  Or, Butch Cassidy and the Sundance Kid? 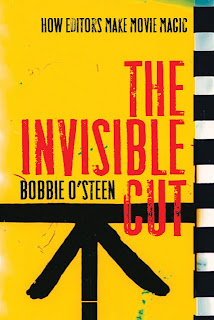 The other night I attended a talk given by Bobbie O'Steen (author of The Invisible Cut: How Editors Make Movie Magic) and film editor John Gilroy (Michael Clayton) held downtown at 92YTribeca.  O'Steen has written about the art of editing and knows all about it firsthand.  She earned an Emmy nomination for editing Best Little Girl in the World.  She not only writes about this skill, but editing is  in her DNA.  Her father, Richard C. Meyer, edited the above mentioned classic Butch Cassidy and the Sundance Kid.  Let's face it -- that movie is a gem not only because of William Goldman's witty one-liners and characters, but because of the way the movie is edited -- its pacing and style.  That movie grips us from frame one and never lets go -- right up until the iconic freeze frame at the end when Butch and The Kid come out with guns blazing.  The talk focusing on the editing of Michael Clayton showed what an essential role the film editor has in shaping the movie, assisting the director, and creating the tone and pace of the movie.

By the way, O'Steen's late husband, Sam O'Steen, edited The Graduate.  Not too shabby.  If you want to learn about film editing, I recommend you pick up her book.

It's often said that a movie is rewritten in the editing room.  A great script is rarely shot exactly as it's written on the page.  It can't be -- a director interprets it, then the actors, and finally a film editor.  Editing is often about elimination.  A good editor has an eye for what works and doesn't in a movie -- and just like with a script, usually less is more.  It's amazing how much can be cut from a script, or scene, or movie, and yet the story works even better.  Haven't we all seen movies that begged to be shorter?  A movie that would have had more punch if only the editor would have been allowed to do his job?

As screenwriters, we can learn a lot from great film editors and their collaborations with top directors.  Watch your favorite Martin Scorsese movie, but also thank his film editor Thelma Schoonmaker (pictured below), because she probably edited it (she won Oscars for Raging Bull, The Aviator, The Departed). 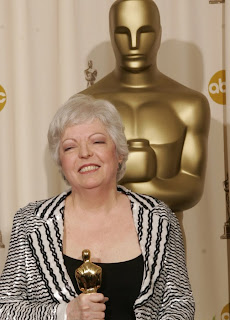 Or how about Dede Allen?  She edited many of Sidney Lumet's movies (Dog Day Afternoon and Serpico).  Ms. Dede passed away earlier this year at age 86. 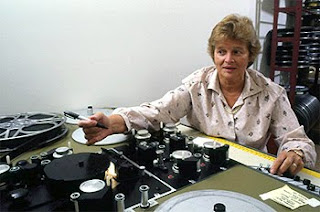 How about Verna Fields who edited Jaws?  Wow.  We all remember the scary music... but also the visual pacing of Jaws kept us riveted to the screen.  Verna Fields won an Oscar for editing that one.  Women film editors have put their stamp on so many American classic movies we have come to love and cherish.

So the next time you watch a film, pay extra close attention to who wrote it... and yes, who edited it.  It's the delicate craft and art of words mixing with images that capture our hearts in the dark.

Until next time.
Posted by Janet Lawler at 10:55 AM No comments:

THE PERFORMING ARTS LIBRARY IN MANHATTAN 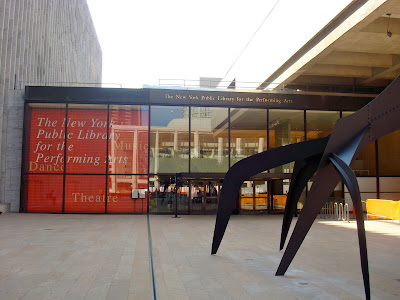 If you love the Arts, you must visit the Performing Arts Library in NYC.  It has a treasure trove collection of plays, screenplays, biographies and performance media.  You can watch classic films or taped performances of great stage productions.  The New York Performing Arts Library is located in Lincoln Center at 66th Street.  It's a beautiful library with rich resources for writers and other artists for research and to borrow.  Here is it's link http://www.nypl.org/ for more info.

I've also found that the Museum of the Moving Image located in my neighborhood in Astoria has great films and panelists that are inspiring and informative.  I just downloaded a bunch of podcasts online from their Pinewoods Dialogues series.  The current one features actor Michael Caine that is worth a listen to at http://www.movingimagesource.us/dialogues/view/333

My iPod is filled with free podcasts also available from iTunes... I download everything from Apple's Meet the Filmmakers to the Creative Screenwriting Magazine's podcasts.  I'm taking a long car trip soon to North Carolina, so I'll be able to catch up on many in the car.  Podcasts are great on airplanes... I listened to several on a recent trip to Phoenix from New York.  It passes the time quickly and drowned out the screaming kid sitting behind me. We're fortunate to be pursuing careers in the Arts now when so much priceless free material is at our fingertips through the internet.

So next time you're in Manhattan stop by the Performing Arts Library in Lincoln Center and have fun browsing the stacks.  There is plenty of space to find a good book and read or pop in a DVD and watch the masters at work. Then, after, stroll through Lincoln Plaza, see the recently renovated Revson Fountain (made more famous in that memorable scene where Cher meets Nicolas Cage for a night at the Opera in Moonstruck) and walk across the street for a burger at P.J. Clarke's. You should never be bored living in or visiting New York. 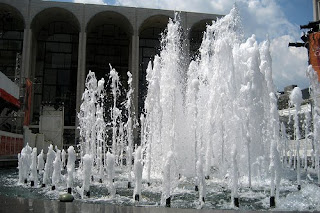 Until next time.
Posted by Janet Lawler at 11:37 AM No comments: